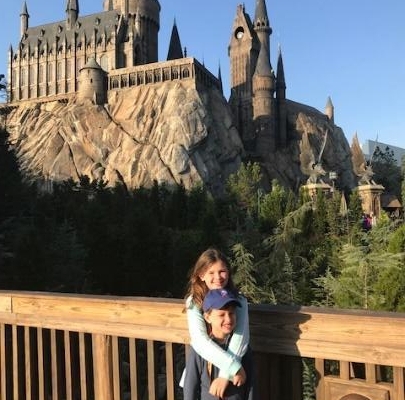 For Spring Break, I went to Universal and I want to tell you all about it (and if your family is thinking of visiting there I think you should keep reading).

First the hotels. Lots of very different ones… there is Hard Rock Hotel where you feel like rock ‘n roll royalty, and there is Loews Portofino Bay Hotel were you take a trip to Italy and have a wonderful view of the Italian river, and now there is the Loews Royal Pacific Resort and there you relax in a tropical South Seas paradise, next up is Loews Sapphire Falls resort and it kind of like Loews Royal Pacific resort (but less fun), now here is Universals Cabana Bay Beach Resort were it takes you to the 1950’s and 60’s, and last but not least Universals Aventura hotel but is not open yet till August 2018. There are many more options if you want to keep looking. But my family thinks Portofino in our opinion is the best. Also Hard Rock , Royal Pacific and Portofino Bay get early access to the theme parks and unlimited express passes also amazing pools and sometimes you don’t even have to go to the theme park, just have a great day at the hotel they have great restaurants too and right on the hotel campus plus every hotel has a boat that takes you where you need to go…or a shuttle bus…or walk to other hotels nearby for dinner or pool or hangout.

Next Universal Studios.  First, get your wand at Harry Potter world in early admission because there is a HUGE line for the wand experience were the wand chooses you. And you will be in Diagon Alley and Lockturn Alley. Interactive wands can cast spells in windows of shops in Lockturn alley or Diagon alley. Best place to go get them is Olivanders. By the way, the Harry Potter world when you first walk in it kind of smells old and dusty and Smokey. Then Gringotts ride is amazing but get there early because they get a full crowd. You are in a cart with 3D glasses. Can also get a robe at Madam Malkins robes for all occasions. The Leaky Cauldron great place for butter beer (safe for kids) …and food. If you can get a 2 park pass, you can ride the Hogwarts Express.

Other popular rides at Universal Studios: Simpsons ride is fun, it’s like a carnival and after the ride you can you can play some games and win prizes. Transformers seems scary but not bad. Men in Black Alien Attack is fun. Jimmy Fallon Race through New York you’re in a car with 3D glasses and you can meet and give a high five to a panda named #Hashtag. The Minions ride is fun kind of the same thing as Jimmy Fallon but Gru is trying to turn you into a minion.

At night they have parades…it’s called Mardi Gras and they threw a ton of beads for us to catch.

One of my favorites is Citywalk where you can get food at…. The Toothsome Chocolate Emporium and Savory Feast Kitchen that place has crazy milkshakes see and there are more restaurants.

Now to the next park…

Islands of Adventure also has early park admission but this time just in Hogsmeade and at the Hogwarts Castle. You can go in to ride the most popular ride…the Forbidden Journey in the Hogwarts castle. If you’ve read first three books it will make sense. If you have not read it, it is still fun. If you want Wizard sweets go to Honeydukes. You can also go on the Roller coaster the Flight of the Hippogriff.

Go to Hogsmeade Station…travel back and forth between Diagon Alley and Hogsmeade and between theme parks.

Don’t forget the Light show at night at the castle. And Three Broomsticks to eat…they have outdoor seating (that place smells odd too.)

Right next door is Jurassic Park. By the way bring a poncho just in case…Jurassic River Ride is where you will get soak and my family got the front row, and there is a giant lift ride like a pyteradactal and you can see the whole park from there.

There if a Spiderman ride and if you like Transformers you will like this. Also, there is a comic land

And — Do Not Eat before the Hulk coaster!

Also go on Popeye’s and Bluto’s Bilge-Rat Barges and no one gets off without getting soaked. Are you brave enough to get soaked?

And there is a Dr. Seuss land a little easier and quieter time.

is the new one first you get a Taputapu where it scans it and puts you in a virtual line. They have rides like Maku of Maku Puihi and Honu of Honu Ika Moana

So, I probably told you lots of stuff you know, but not all. Universal is a great place to go for winter break, spring break or summer vacation. A fun family times. Now you know how much fun I had I think it was my most favorite family vacation. Thanks for listening. BYE! 😊

Categories: News You Can Use